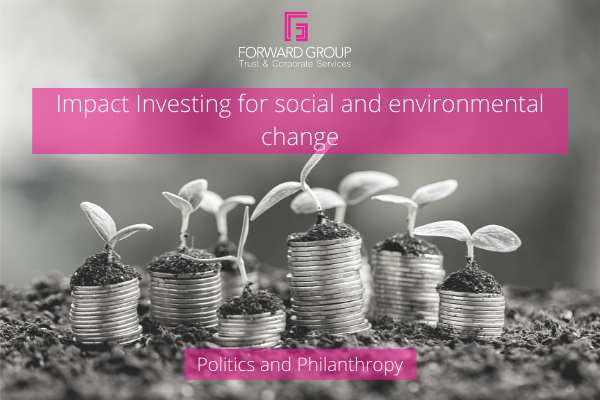 Traditionally the entrepreneurial philanthropist brings innovative ideas and fresh thinking. Unless they are a well-known celebrity the giving as such tends to go unnoticed. These ‘unnoticed’ philanthropists have commonly supported numerous small initiatives in the local community for social benefit or the underprivileged. Such schemes could be termed ‘venture philanthropy’ but are far removed from John Rockefellers’ view that it was “an adventurous approach to funding unpopular social causes”. Today the move is far more towards ‘impact investing’.

However, in the post pandemic world there is a growing requirement of the high net worth and ultra-high net work to support elements of global recovery and the increased focus on social investing and social profit schemes. Impact investing is one such area that supports this with the dual goal of making profit and creating positive social, environmental, employment and education improvements. In emerging economies typically, we see such investment supporting sustainable agriculture, healthcare, housing and the development of cleaner technology.

All trying to make a difference of varying levels and the list could go on. Despite the extravagant lifestyles and constantly being in the public eye so many celebrities are trying to use their influence for change to so many social and environmental issues.

Making a difference they are, but is it enough? Can they influence government policy and lobby for change and at a time when there is so much focus on the human impact on the environment and social deprivation and it is so desperately needed? Are they truly being listened to by those that have the power to make great change?

Look back a few years and you see Bono and Geldof spending a great deal of time and effort, with the support of many others, backing the jubilee 2000 ’drop the debt’ campaign and forcing successful change to policy. Geldof himself spend a great deal of time privately lobbying Tony Blair and the Live 8 concerts in 2005 leading to the G8 agreeing a £50bn aid boost for Africa. It highlights that the celebrity can influence and make a fundamental difference.

So, what for the next generation ?

With the stars of today having so much presence and exposure across social media, sharing their thinking, views and highlighting their endeavours they have so much opportunity to continue to influence views and force social and political change. We also have the new generation of activists supporting efforts such as Greta Thunberg and Malala Yousafzai, all unelected trying to ensure public policy reflects collective interests.

The landscape between politics and philanthropy is a complex one, but what is clear the world of Philanthropy and the unelected celebrities will not stop with their impact investing and drive for positive social and environmental change. At the time of writing the world waits with bated breath to see the commitments and reactions from the world leaders at the UN COP26 Summit. Philanthropists, Celebrities and Activists alike are all intelligent enough to appreciate change takes time but, as Sir David Attenborough said, “There is no going back – no matter what we do now, it’s too late to avoid climate change and the poorest, the most vulnerable, those with the least security, are now certain to suffer.”

Without a doubt Impact Investing and Philanthropy is the way forward!